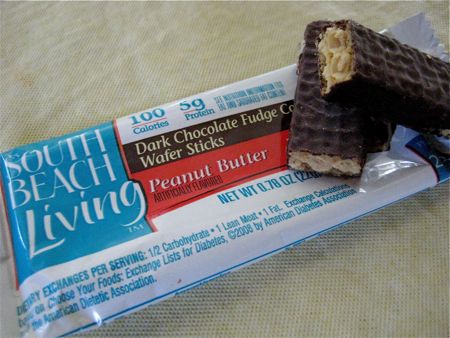 I received some free samples of Kraft South Beach Living wafer sticks from a PR rep for the company, along with those chocolate pudding cups I reviewed last week.

Kraft definitely seems to be targeting the typical American woman with these products from the South Beach Living line. They're doused with chocolate fudge, they're conveniently packaged as a grab-and-go snack, they require no prep, and each individual pack contains two bars for only 100 calories, adding a sense of bang for the buck.

Each two-bar pack also has six grams of fat (three grams saturated in the Hazelnut Crème, two in the Peanut Butter), five grams of protein, one gram of sugar, and three grams of fiber. Despite the relatively healthy stats, I'd consider these more of a dessert treat, like a cookie, than a hearty snack, like a granola bar. They're too light and airy to satisfy hunger.

This package boasts many easily recognizable baking ingredients: Dutch-processed cocoa, sugar, vanilla, milk, baking soda, and so on. Since the bars are South Beach-branded products, whole-wheat flour outranks regular flour on the ingredient list, and that may explain the high fiber content for a cookie.

The sticks' protein level is boosted with wheat gluten. The nutty ingredients rank pretty low on the list, which might be why the nut taste is overwhelmed by a wheaty taste. The wafers taste sweet, but they taste sweeter after swallowing. Maybe that's due in part to the maltitol (a sugar alcohol) and sucralose (Splenda).

Scott did not care at all for the Hazelnut Crème wafer sticks. I quote: "I'd rather eat two pudding cups than one of these" for about the same calories.

I have to go with Scott on this one. The cookies have an initially bitter taste from the dark-chocolate coating that, instead of being balanced by a creamy, sweet interior like other wafer sticks, is turned up by a somewhat bitter whole-wheat flavor. As I mentioned, the flavor does sweeten up as it sits in your mouth, but that's not really what I'm looking for in wafer sticks.

The nut flavor in the Hazelnut Crème seems nearly imperceptible compared to the chocolate and crispy wafers. What's there isn't pleasant enough to carry the bar. The Peanut Butter, though, has a strong peanutty flavor that should gladden lovers of Reese's Peanut Butter Cups. I just am not a peanut butter cup fan myself.

Another problem I had with these is that they seemed to dry my mouth as I chewed them up, like saltine crackers. Dessert should make your mouth water!

Also, be careful with that chocolate fudge coating. Unlike M&M's, it will melt in your hand. Bring a napkin!

In the end, I'd recommend sticking with the tasty chocolate pudding cups if you're looking for a low-cal treat. Those are sweet, rich, and satisfying, whereas these wafer sticks . . . aren't. Still, if you love peanut butter cups and want a crispy alternative, the Peanut Butter flavor might be your ticket.