Getting Out From Under The Weather 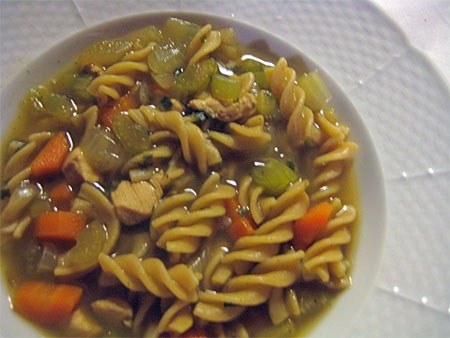 Whether it’s the now drizzly, chilly weather or a common malaise, chicken soup can cure what ails you.

I often whip up a batch whenever my husband catches the rare cold. It’s one of his favorite meals in general, one he made himself probably once a week when he was a bachelor living in Seattle.

My husband, incidentally, lived on about four dishes during his first couple years of grad school before we were married: chicken soup, tofu stir-fry, salad, and pizza from the Domino’s across the street. If not for all those sausage pizzas and a weakness for Red Vines, he would have had the healthiest diet of anyone I knew.

True story about my sweetie. He's a chicken soup fiend.

Rachael Ray inspired me to try my hand at chicken soup years ago, and I taught Scott my version of her recipe. We've both tweaked from there over the years; Scott likes to throw in his grandma's homemade egg noodles whereas I prefer whole-wheat pasta. I use more veggies and less chicken, and I save money by seasoning out of my spice cabinet instead of buying fresh herbs.

I use chicken breast in part because it's convenient and in part because it's the leanest part of the chicken. Dark meat tastes unpleasantly greasy to me, though if you prefer its fuller chicken flavor and don't mind a few extra grams of fat, it does take a smaller chunk of your change.

Rachael Ray, incidentally, makes her chicken soup with tenders. If you cut the tenderloins of the back of your boneless, skinless breasts to ensure more even cooking, throw them in the freezer so you can make a pretty economical batch of soup down the line.

Fit Fare has lots of soup recipes should you be looking for more bowls to warm you up as the weather cools down.